Today is my birthday.

The age at which you “died”.

But you didn’t really die.

Is this real world or exercise?

And the tree of life.

It has been a long time.

Perhaps you thought I was dead.

Perhaps I thought I was dead.

And so this is a perfect movie with which to attempt a comeback.

To get her together.

It was a rough day.

NEADS thought it was part of an exercise called Vigilant Guardian.

Michael Ruppert (may God rest his soul) documented the litany of war-games which were active on 9/11/01.

And Michael Ruppert wrote about this in a tome which should serve in some ways as a sort of bible for those wishing to know the truth about 9/11:  Crossing the Rubicon:  The Decline of the American Empire at the End of the Age of Oil.

Ruppert was wrong about some things.

Perhaps my understanding is hopelessly daft, but it seems that hydraulic fracturing (“fracking”) changed the geopolitical world immensely.

Just a few years ago, rather intelligent folks like Leonardo Maugeri (to name a typical example) were bemoaning the hydrocarbon “cliff” off of which we were about to leap.

That has not been the case.

Maugeri’s book The Age of Oil:  The Mythology, History, and Future of the World’s Most Controversial Resource is wildly, spectacularly wrong.

Which also means that Dick Cheney and all those arch conspirators* were also wildly, spectacularly wrong about the importance of the Caspian Basin.

Let me put it to you this way:  if you really believe 19 blokes with box cutters brought the U.S. military machine to its knees, then I can’t help you.

As for me and my house (so to speak), we do not believe the box cutter theory.

And so we come to the DoD and fictional characters such as Stephen Falken.

And Albert Wohlstetter (not forgetting his ever-so-important-to-the-neocons wife Roberta).

So much has happened.

And so much is at a precipice.

It is my firm belief that 9/11 was some sort of engineered* conspiracy which involved boxcutters and Muslims in only the most tangential of ways.

But you will have to learn that parallel history.

And I shall show my enlightened, nonpartisan wisdom by recommending Trump-hater Webster Tarpley’s 9/11 Synthetic Terror:  Made in USA above all other books on the subject.

Indeed, I look forward to hopefully adding another Trump-hater (Wayne Madsen) book to my collection soon…one which discusses to what extent and in exactly what ways Saudi Arabia and Israel were involved in the 9/11 false-flag/stand-down.

Which brings us back to Pieczenik.

But let us at least attempt to make passing reference to the film under consideration.

If you’ve never seen this movie from the beginning (a cold start), I highly recommend adding such footage to your filmic knowledge.

Humans in the loop.

As humans are removed, MAD (what, me worry?) becomes even more unequivocally assured. 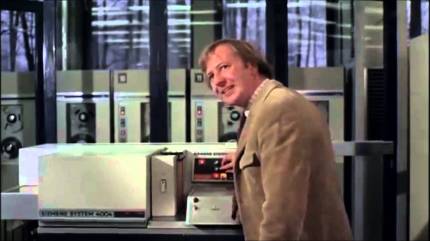 It is somehow fitting that WarGames should make a Burger King allusion in 1983.

Indeed, this was the period of the very real (and ridiculous) “burger wars“.

But let’s get on with it…

I must say…this film deeply affected me as a kid.

Perhaps it was due to the wonderfully effervescent (what is she, a sparkling wine?!?) Ally Sheedy.

Sure…  There are a couple of moments of unbearable melodrama to make this movie slightly imperfect, but a kid doesn’t notice such things.

And so as a youth, I ate this film up.

Broderick and Sheedy as “partners in crime” (somewhat literally…).

It would be like some high school kid hacking into the USAF’s Space and Missile Systems Center (SMC) to play a “game”.

Is this real world or exercise?

Which brings us back to the ubiquitous Baudrillard.

And, if you can bear it, Debord.

But let’s change tacks for a second.

Back in the Cold War days.

David Lightman would have been a prime target for recruitment by a foreign intelligence service (or so this film claims).

However, I would point out a plane which the passing analysis seems to miss:  industrious brilliance.

Recording the analog [?) signal of the infirmary door with a psychiatrist’s micro-tape recorder.

Removing the tap from a pay phone and using a pull tab to hotwire a call back home (in lieu of a quarter).

These are the assets of operators.

Whether CIA or early FBI, appreciation for unconventional skill sets has been a hallmark of organizations engaged in successful growth.

Put differently, David Lightman would have made a pretty great spook.

Indeed, his skill set might have been best utilized by the NSA (no such agency).

Back in the day.

Before the world changed.

The average citizen had no idea about the National Security Agency back in the Bobby Ray Inman days (1977-1981).

To make a matrix.

This anxiety of being ushered into an FBI van.

Picked up on the street.

A unique take on “talent spotting”.

These films are real.

And offer us hope.

Former DIA head Gen. Flynn has an appreciation for this.

“…you magnificent bastard, I read your book!”

Really a rather laborious (and dead-on) archetype.

Which is appropriate, seeing as how the subject under consideration is Global Thermonuclear War.

But it stumbles in a few places.

Not least, at the end.

Yes, like the slew of “disaster movies” (such as Deep Impact) which glutted picture houses at the end of the last century, WarGames hones in on a maudlin tessitura which is made ineffective by repeated use.

In plain English, this film has two endings.

And they are identical.

And the aforementioned melodrama.

Yet for all its imperfections, WarGames is a masterpiece of sorts.

And so I salute director John Badham.

Have you ever used Russian Wikipedia?

Because you can’t just type Ivan the Terrible.

You can’t even type Ivan Grozny.

But by that point, you are close.

Funny thing about the Cold War was that it was cold.

At least the big guns.

It was an economic war.

It would really be unfair to capitalism to claim that it didn’t win.

Capitalism is bad in a lot of ways, but it is an economic beast.

Communism is good in a lot of ways, but it got its butt kicked by capitalism.

But our story predates Marx and Lenin by centuries (even though it was commissioned by Stalin).

What we have here is a masterpiece of Soviet film:  Ivan the Terrible (Part I).

Because Часть II wouldn’t appear for another 14 years (Stalin was a fickle patron).

And Часть III would never appear.  [It was destroyed after the director’s death.]

And what a director!

Sergei Eisenstein was a true auteur in every sense of the word.

Considering that, it’s amazing that Часть II itself even survived.

It was only the “Khrushchev thaw” which occasioned its eventual release in 1958.

And Ivan (though he doesn’t look it in the film) is 16 years old.

If it had a rhyme, Bob Dylan would have smacked it right down in the middle of The Freewheelin‘ or Another Side…

And so we see a truly riveting coronation (this is not really a spoiler…1547).

We must remember what “the Terrible” meant.

As I understand it…it’s neither good nor bad.

Terrible as in terror…but also as in “fear God”.

Perhaps I have botched it.

grozny (miniscule).  As opposed to the capital of Chechnya.

Let me just say this:

Nikolay Cherkasov (in this film) is the spitting image of Nick Cave.

[God forbid an iconoclast get ahold of a spitting image!]

I mean the Nick Cave from Warracknabeal, Australia.

Not the one from Fulton, Missouri.

Ivan the Terrible “read that book from back to front”.

“It made a deep impression” (on his forehead).

So not even a gift of a chess set could cause Queen Elizabeth to beam a broadcast of Gardeners’ Question Time over to Ivan.

Alas, he was on his own…

Boyars be boyin’ [if you know what I mean].

I must admit, I’m rather proud of myself for figuring this out.

To wit, Михаил Названов looks like Gene Wilder as Jesus.

Which is to say, Andrey Kurbsky is played by Mikhail Nazvanov.

Every epic needs a great beauty 🙂

And Lyudmila Tselikovskaya is no exception.

She is chaste (and chased).

But there is an article.

She was from Astrakhan.

Ivan the Terrible is basically Donald Trump (for anyone needing a reference).

Which is why Stalin identified with Ivan.

Putin is another good reference point.

For that matter, Pavel Kadochnikov’s effeminate, moronic character is a good symbol for the past 16 years of American presidency.  Imagine W. as a metrosexual in 16th-century Russia.  You’ve got it!  16 & 16.

Marriage is the end of friendship (in more ways than two).

And so Philip II, Metropolitan of Moscow heads off to the monastery.

But at this time he was just Feodor Kolychev.

But the House of Romanov takes an extra effort.

Do you remember Kazan from Quantum of Solace?

I never properly expressed my admiration for that film.

Back to Kazan…  Poor saps vs. rich saps.

And military strategy comes to the fore.  That of Ivan.

Their strength was sapped.  One letter from tapped.

That would be Operation Gold!

There’s a Tartar sauce of brutality (?) reminiscent of ¡Que viva México! (remember the horses and the buried guys???).

Because Citizen Kane was 1941.

The Soviet Union joined the Allies in June 1941.

Citizen Kane premiered the previous month and would open in theaters across the U.S. the coming September.

So we wonder whether one of the first “chess sets” of understanding was a copy of Welles’ film.

Back to these Tartars.  That’s just the Western version of Tatar.

You may need some tarragon as well.

It certainly wasn’t “Palisades Park” for these poor Tartars.

No Freddy Cannon sound effects to distract them before being picked off by (demonym-for-people-from-Kazan) arrows.

Over and over we hear of Livonia.

Reval (which is today Tallinn, Estonia).

Oprichnik.  Of the Oprichniki.  Political police.

Oath of allegiance (starting to sound like Dale Cooper).

But lets not get caught up in bikeshedding.

This film is a masterpiece throughout.